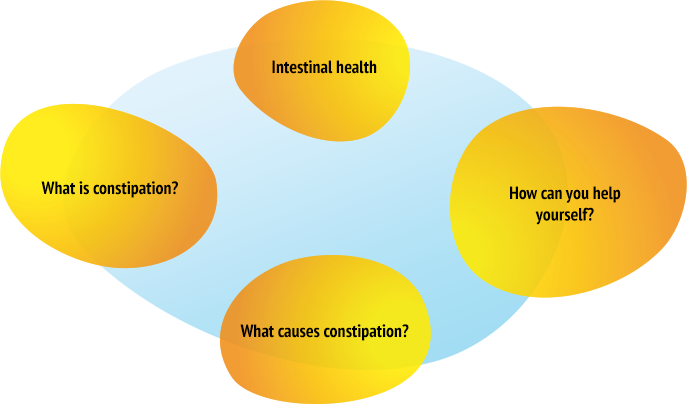 Food and beverages consumed during the day our body can’t use immediately, so all we eat and drink has to be broken down in the digestive system before. This extremely effective system consists of a large number of organs with specific roles in digestion. The digestive system is responsible for the breakdown and absorption of vitamins, minerals and other vital nutrients from food. Interesting fact is that during a 75-year life our intestines process about 30 tons of food and 50 000 l of liquids.

Therefore, the maintenance of a healthy digestive system is an important factor in maintaining the overall health.

At the same time, a healthy digestive system significantly reduces the likelihood of digestive disorders such as bloating, constipation, diarrhea and facilitates regular elimination of waste substances from the body.

The digestive system is home to large number of good as well as potentially bad bacteria. The balance of these bacteria, known as intestinal microbiota, supports healthy digestion.

The bacteria are involved in the breakdown of waste substances, are active in the synthesis of certain compounds, are important for the maturation of the intestinal mucosa and the development of intestinal immune system. Less familiar, but extremely interesting fact is that more than 70% of all immune cells are located in the digestive system. It means that bowels contain more immune cells than any other part of the body. So digestive system is actually the first line of defense for our body against external challenges.

Stress, illness, age, antibiotics and/or certain medications, poor diet and lack of fluids can disrupt this well-organized system. Imbalance of the microbiota can lead to a reduction in the number of beneficial bacteria in the intestines, which can result in the digestive disturbances.

Intestinal disorders such as constipation are in lot of cases associated with the disturbance of the intestinal microbiota. Without regular bowel movements stool remains too long in the intestine which consequently leads to changes of the bacterial flora and intestinal imbalance.

A healthy digestive system is of high importance for personal wellbeing and overall quality of life. Regular digestion differs from person to person. Depending on the diet, age and daytime activities, bowel movements 2 to 3 times daily or 2 to 3 times a week is considered normal.

But, due to a modern way of life and chronic lack of time many people suffer from digestive disorders. Constipation is a problem from which occasionally suffers almost 30% of the population.
One of five adults occasionally suffers from constipation, and two thirds of affected are women. Women are particularly vulnerable and one reason for that are regular hormonal changes from puberty to menopause.

The causes of constipation are various. They often lie in poor diet and lack of exercise, but stress, climate change, jet lag, travel and any other changes in a daily routine can also disrupt the intestinal balance and cause constipation.

Symptoms differ from person to person, but usual symptoms of constipation are:

If the symptoms are present for 3 months or more it is considered a chronic constipation.

The common causes of constipation are:

How can you help yourself?

Since lifestyle factors, particularly lack of exercise and diet low in fibers, cause constipation in most cases, lifestyle changes are crucial.

Also, be sure to establish a good routine and reduce stress significantly.